The revivified Ad:Tech New York 2016 show featured a rollicking panel that the Producers Guild of America (PGA) produced on Thursday, November 3rd, Day 2 of the show, in which leading New York agency producers (all but one PGA members) discussed the trends that are shifting behaviors among brands and consumers alike.

A packed house filled the “Titan Hall” in the Javits Center, listening to a discussion that focused on various topics, including: 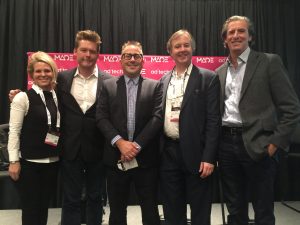 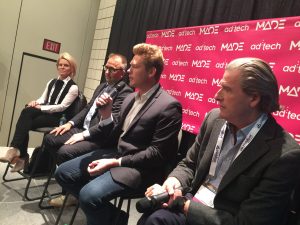 Tom Goodwin discusses agency expectations for AI
Jason Jercinovic iscussed the “humans behind AI” and how cognitive computing – namely, IBM Watson – has helped generate better decision-making for clients such as TD Ameritrade, where customers were more likely to honestly interact with machines than with their human counterparts. 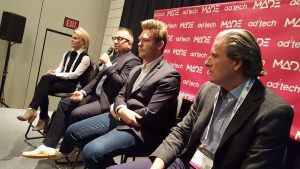 Jason Jercinovic discusses the cognitive era of producing
Cindy Pound mentioned the Pumpkin Spice Latte chatbot that Starbucks set up in October, 2016, where more than 500,000 interactions yielded impressive engagement for the coffee company. 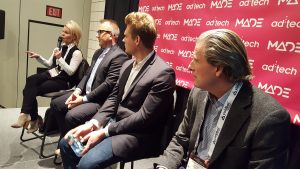 Cindy Pound discuses the chatbot phenomenon
Raoul Didisheim outlined the challenge that luxury brands still have with new technology, and said that the integration of human high-touch retail experiences must be delicate and seamless in order not to offend luxury customers. He said that “any email list of a luxury brand would show that a large percentage of their consumers still have AOL addresses.” 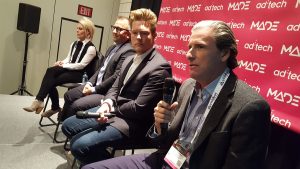 Raoul Didisheim discusses the luxury sector
The audience discussed opportunities that have been seized upon – such as the smart integration of brands in NetFlix’s ‘Luke Cage’ – and possibly missed – such as Game 7 of the World Series, where no “Dunk in the Dark” moments emerged on social media (despite, as an audience member indicated, the success of Twitter’s Hashtag World Series).
Ad:Tech New York 2016 was a milestone for the digital media industry: the 20th anniversary of a show that used to be mostly about platforms and technologies, but has now recognized that th content creators are still behind what is sold to consumers. Kudos to Lori Schwartz, Kendall Allen, and the team that produced the show. It brought in many firt-time visitors to Ad:Tech, and that in itself will help shape the future of this vital industry sector. 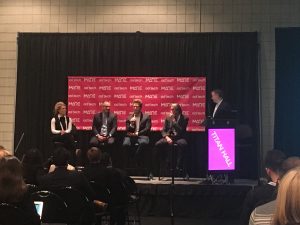 A view from the audience.